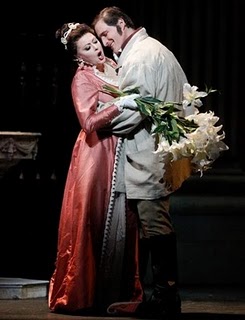 When Palm Beach Opera artistic director Bruno Aprea strode into the pit Friday evening to lead the second act of Tosca, there wasn’t just applause from the Kravis Center audience. There were cheers.

Aprea and the orchestra were the biggest stars of this finely paced, tension-filled performance, giving a darkly lustrous account of Puccini’s score.

There were other highlights as well. The hefty voice of soprano Chiara Taigi brought an unaccustomed depth and worldliness to the role of the renowned singer Floria Tosca. Sets and direction were traditional and effective, with realistic portrayals of the church interior, police chief’s office and ancient Roman castle in which the desperate final actions of Tosca’s life took place.

But it was Aprea and the orchestra that were the most consistently effective element of the production. In this core work of the Italian repertoire, orchestra and conductor were entirely in their element. With the exception of some out-of-tune solo string playing just before the third-act tenor aria E lucevan le stelle, the playing was technically immaculate. There were many great moments: the ominous flute playing as Scarpia threatens Tosca and Cavaradossi, the dark twisted sounds that accompany the police chief’s scheming in Act 1, the grinding, tension-filled passages as the torturers work on Cavaradossi.

Fittingly, the role of Tosca was taken by a native of the city of Rome. Chiara Taigi’s rich soprano and subtle acting gave Tosca unusual depth and maturity. Rather than engaging in a succession of over-the-top, jealous diva poses, she gave a realistic – within the bounds of the art form – portrait of a woman of warmth, emotional turmoil and frantic courage. Her singing wasn’t always even or accurate, particularly in the first act, as she berates Cavaradossi about the beautiful blonde woman in his church painting. But her Vissi d’arte was a moving, breathing and emotionally committed performance. Her murder of Scarpia, rather than being a moment for shrieking dramatics, was creepily intimate as she murmured to him to die.